Conlanging with LaTeX, Part One

One common set of questions in conlanging forums is about how to organize the material, the grammar, the dictionary, lessons, etc.  While there are some dedicated language tools out there, most of them are fairly complex or expensive.  So most people just use word processors for their grammars and sometimes spreadsheets for their dictionaries, assuming they use computers at all.

At this point, I'm prepared to say there are no good tools for writing a dictionary.  There are tools out there, but they tend to be very tricky to use well, assuming the hobbyist conlanger can even afford the cash or the time to invest in such tools.  And for tools to let people collaborate on a lexicon?  Forget it.

So, I just write my dictionaries as text.  Here's an example lemma for Kahtsaai, 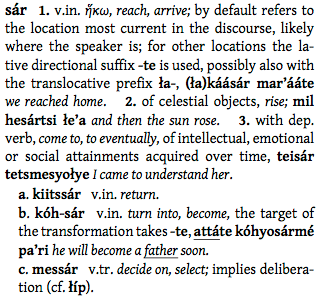 No spreadsheet is going to produce anything that looks like this without a great deal of programming.  It might be nice to have a nifty tool to manage a dictionary entry like this, but a general tool to do that would be so complex that I'm not sure it would be worth the effort.

Because I want my grammars and dictionaries to look good, I had to pick something nicer than a plain text file or even HTML.  I went with LaTeX, a very sophisticated typesetting system that started out in the world of mathematics and the sciences, but which humanities folks are starting to learn to appreciate.  Unlike a word processor, which is WYSIWYG, "what you see is what you get," LaTeX takes a different approach.  You type up your document in a special typesetting language, and then you feed that to a LaTeX program which spits out your document after making all the typesetting decisions and formatting for you.  Paraphrasing, you tell LaTeX what you intend, and it produces the nicest possible output matching your intent.

In LaTeX simple things are simple.  You could typeset a printed letter in it, and except for some messing about at the start of the file, what you had to type wouldn't look much different from an email (though the output would be far nicer).  But, LaTeX is programmable, and is thus capable of very sophisticated things.  Here, for example, is a semantic map which was described entirely in TikZ, a graphics language that exists for LaTeX, 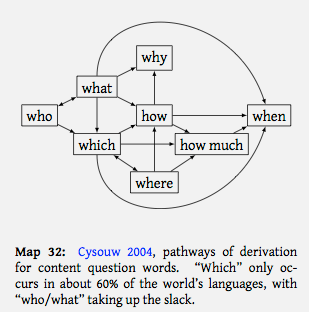 It is this ability to do sophisticated things when you need to that makes LaTeX such a powerful tool.

Due to an early encounter with old Latin grammars, I prefer to typeset my grammars with bold face for text in the language, italics for translations, and just the normal font for English explanations.  But, rather than tell LaTeX to bold everything in my conlang, I write a macro which I enclose all my conlang in.  That way, if one day I decide to format everything differently, I just have to change the macro, run the LaTeX program again, and voilà! out comes a new version of my grammar with everything changed to the new way.  I wrote a set of macros to typeset my dictionary entries in the way I prefer.


In the next few blog posts, I am going to explain some features of LaTeX that would be most useful for conlangers.  I cannot do a full tutorial on LaTeX.   One good tutorial is Learn to use LaTeX, but there are many on the internet easily found by search.  I recommend you practice with a few quick and simple documents before reading the other posts.

LaTeX is free software, and there are several different distributions out there.  I strongly recommend TeX Live.  It's sort of large, but it will have all the extra linguistics packages you want to use, and it includes XeTeX, the most powerful modern LaTeX engine, which speaks UNICODE natively and has far, far nicer font management tools.  It's the best choice for conlangers.  I will assume XeTeX for all my posts on LaTeX.

In my next post, I will go a bit more into detail about the things you'll want in your LaTeX preamble to make XeTeX pick the best fonts for multilingual work.  And maybe start in on tables.
at April 26, 2013 4 comments:

But then I took an aversion to the knee: constructions and collocations

I've been on a Construction Grammar (CxG) kick for a while now. I gave a talk about using it as a creative tool at LCC7. We talked about...